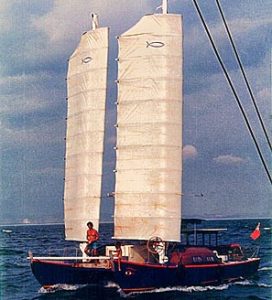 Taulua is the name of the 36 foot catamaran that we built on a wooded hillside in the English Cotswolds, cutting, splitting and steam bending ash wood to make the two curragh-like hulls over which we stretched canvas and paper soaked in wood tar. She is the boat that we “invented” to take us across the Atlantic to the Americas. It took us two and a half years to explore this kind of construction and complete the boat, and a further six months to marinise ourselves, finally leaving England in September 1982. The story of the building of Taulua and of the voyage to Costa Rica is told in Wooden Boat Magazine Sep/Oct. 1986.

The full movie (120 minutes), shows the construction in detail; from sail testing the two inch to the foot model, to the full size boat finally setting off across the Atlantic. The process of splitting a log, first with the wedges, and then using the woodsman´s brake and fro is well documented. To someone used to commercialized timber coming from the mill all squared up, a cleft strake may seem rustic, but in fact it is the ideal material for steam bending, because every single fibre is aligned inside the wood. This technique has largely disappeared in England. The double gunwale construction is typical of a curragh, and we used it to fix the cross beams, making a very strong but flexible frame at deck level. The stringers, as were the beams, were of recycled pine and fastened to the ash ribs with ash treenails. Ash is as strong as oak but much tougher, however the latter was traditionally used for its resistance to rot. Wood preservatives have made the use of ash possible.

During the first two years that we were travelling we had plenty of opportunity to observe Taulua´s performance and when we rented a place in Puntarenas we were able to make a few changes. We changed the sterns into transoms which gave a little more waterline length and a way to fit dual rudders, connected to a central wheel. We took off the lee- boards, which though effective were unwieldly in a seaway, and fitted a low aspect ratio keel along the bottom of each hull. These keels gave us the necessary lateral resistance and also made it easier to clean the hulls when beached. The sail was evolved into a twin, cantilevered mast rig with double-sided balanced airfoil sails, built on flexible wooden battens. Each mast was seated in the keel with a conical roller bearing and at deck lever a cylindrical bearing so it could rotate completely. No stays! The new rig was very efficient, we tested it in well the northerly winds off the coast of Nicaragua. Three point turns were even possible.

After 8 years aboard, we beached the boat in Mexico and settled in a little village on the shore of Banderas Bay. Anyone interested in the hull construction or the sails is welcome to contact us.

Octopus's Garden – The best hostel between Sayulita and Puerto Vallarta 2023